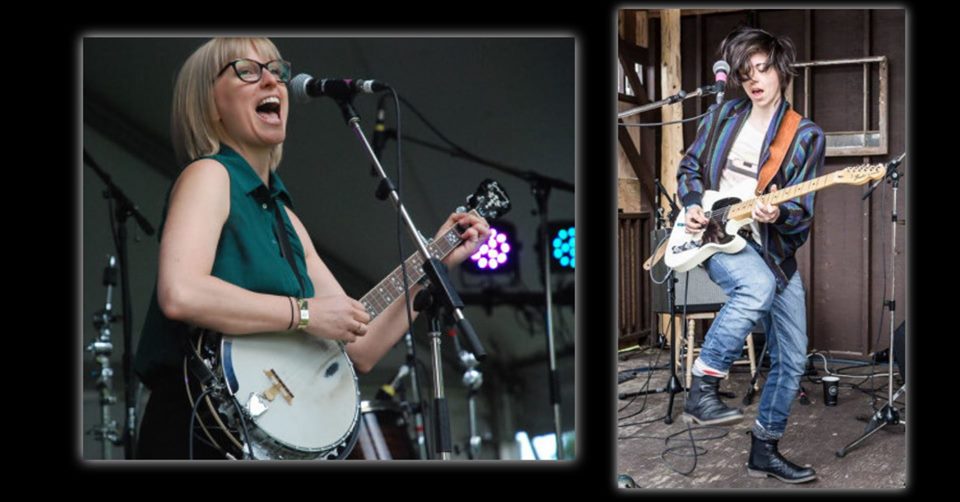 Folk-rock singer-songwriter Leah Barley and blues-rock guitarist-singer-songwriter Caroline Allatt are hitting the road together for a fast and furious two day road trip filled with music that will blow your mind and fire up your soul. Leah Barley Vancouver based Folk-Rock CBC Music JUNOfest (2018) and CBC Vancouver Musical Nooners (2017 & 2016) performer Leah Barley was born in Saskatchewan, raised in Ontario, and fell in love with Bluegrass and Old Time Country when she moved to Canmore, Alberta in her early twenties. She bought herself a banjo and was writing and performing within two months. Since then she’s been accredited as The Banjo Reserve featured artist in February 2019, has recorded three EPs (Come Home 2016, Close Your Eyes 2014, Fly Away 2012), toured throughout parts of Canada, and performed at the Chilliwack Bluegrass Festival (with the Spillionaires 2017), Woodstove Festival (2016), and at the Whiskey a Go Go and Hotel Café in L.A (with the Wayward Hearts, 2015). Leah brings a raw and dynamic performance that captivates any audience with beautiful tones and a ridiculous range that will make your hair stand on end. www.leahbarleymusic.com www.facebook.com/leahbarleymusic www.instagram.com/leahbarleymusic/ Caroline Allatt Engaging and transformative on stage, the blues-rock guitarist-singer-songwriter Caroline Allatt has sparked up energy throughout BC and the Yukon in the past year with her fearless performances where she expresses a fire within her on stage. Her approach comes from a place of spontaneity and self-love. Allatt’s hook-laden sound has been linked to Stevie Ray Vaughan, Janis Joplin, and Bonnie Raitt. www.carolineallatt.com www.facebook.com/Caroline-Allatt

Join us today in #GoldCountryBC and check out all

In Quebec Sugar Shacks are a warm, inviting and fr

Did you know? Here in Canada National Volunteer We

Join us today and explore this authentic shop in #

Help us exhibit our region!

Despite their title, the "Tail" seen on the Tailed frogs is not a tail, but rather the male's reproductive organ.These pebbly, tan to chocolate-brown coloured frogs reach only up to about 5 centimetres in size and live in cold mountain streams. They are also a member of one of the most primitive frog families in the world.These frogs are blue listed in British Columbia, meaning they are at risk, with the steadily increasing temperatures of BC encroaching on their habitat. Click this link to learn more about the habitat, biology, ecology, and conservation of Ascaphus Truei, the Coastal Tailed Frog: www.env.gov.bc.ca/wld/frpa/iwms/documents/Amphibians/a_coastaltailedfrog.pdfPhoto credit: Jared HobbsVillage of Ashcroft | Love Clinton | Village of Cache Creek | District of Logan Lake | Savona Activities | Lillooet, British Columbia #WildlifeWednesday #AdventureToLearn #ExploreBC #ExploreGoldCountryBC #Geocaching ... See MoreSee Less

Does tourism "Spark" your entrepreneurial spirit? The Tourism Innovation Lab has launched its' "Spark" program in the Thompson-Nicola which includes a few communities in the area we call Gold Country! Show us what your idea is, for an opportunity to win seed money in the form of a $3000.00 seed grant, invaluable hands on mentorship, and be part of an amazing community see full details here: www.tourisminnovation.ca/ThompsonNicola Village of Ashcroft @villageofcachecreek Cache Creek-Info District of Logan Lake Village of Lytton @@villageofclinton @tourisminnovationcanada #exploregoldcountrybc #entrepreneur #tourism ... See MoreSee Less

Rising some 4,000 feet above the surrounding landscape, Savona Mountain affords outstanding views over the Thompson River valley. Cliffs, canyons, and dry ridges, along with lakes, marshland, and high elevation grassland, give a superb overview of the diversity of the region; while a pictograph in excellent condition, and ancient burial sites, are evidence of the presence of First Nations people for many hundreds of years.Savona Mountain is formed by the remnants of a shield volcano. A shield volcano is formed by a highly fluid eruption of lava, which is low and spreads outwards, covering a large area. The eroded summit of Mount Savona has a large number of shallow caves, which containInteresting rock formations of agates and green opals.Another feature at Savona Mountain is the Coyote Rock. This was the name given by the Secwepemcpeople to a particular type of geographic feature found throughout the area, the most famous example being the Balancing Rock off Highway 1 west of Savona. A “coyote rock” is formed when a cap rock of hard material sits atop sedimentary rock, silt, and sand, which is gradually eroded away to form a column or pillar with the cap rock balanced on top. The Secwepemc people believed that these coyote rocks were land markers created by the Old One, or Creator, and his chief assistant Coyote, who left them behind to remind the Secwepemc of their responsibilities, and mark their territory. In addition to such common Gold Country vegetation as Ponderosa pines and Douglas fir, Mount Savona contains the highest elevational known occurrence of the Fame flower, which occurs in Canada only in the southern interior of B.C. The Fame flower is a low, ground-covering plant shaped like a mat, with waxy green, roundish leaves. It favours south- or southwest-facing expanses of flat volcanic rock, and blooms from late May through July with small flowers (usually white, but also appearing in shades of pink and yellow).Village of Ashcroft | Love Clinton | Village of Cache Creek | District of Logan Lake | Savona Activities | Lillooet, British Columbia #TrailingTuesday #AdventureToLearn #ExploreBC #ExploreGoldCountryBC #Geocaching ... See MoreSee Less

Many major routes that have been previously affected by floods and mudslides in the area of the Interior have now been repaired. However, many routes are not fully restored and have alternating single lane traffic.  Please plan your trip accordingly giving yourself enough time to allow for slower movement in these areas. Please be respectful of all personnel and equipment on the roads.

Please #KnowBeforeYouGo. Keep current with all travel advisories and be prepared. We are now in the winter season. Be prepared for winter driving conditions and check out the Gold Country winter ready check list!

Please see the following links before you make any essential travel plans. If you are already in Gold Country, please follow all local advisories: