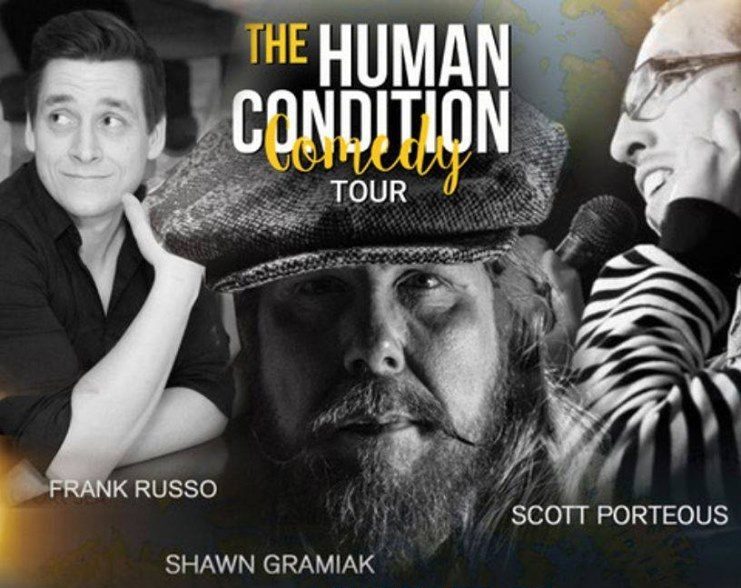 The Human Condition Comedy Tour makes a stop in Ashcroft, BC The Human Condition Comedy Tour will be a ground breaking and historic journey. Three comedians will be traveling all across this great country to lift spirits and raise money for several different local charities and causes with the support of their sponsors, friends, families and fanbase. This will be a monumental tour. “We wanted to put on a tour that represents human connection amongst anything. Regardless of our differences it’s always beautiful to be able to find a common cause that brings everyone together.” The Tour consists of three comedians: Shawn Gramiak: For almost 20 years, Shawn Gramiak has been a comedian, educator, writer, entrepreneur and award-winning public speaker and podcaster. He’s much more than just a hot blond with a great set of wits! Scott Porteous: In the 16 years that Scott has been performing comedy he’s been able to perform all over the U.S & Canada sharing his style of humour with several different audiences. He’s performed at The Winnipeg Comedy Festival and can be heard on Sirius XM. Frank Russo: Frank Russo is known for taking the mundane and dragging it into the absurd. Intelligent and witty, Frank disarms the audience with his charm as he shows them the world in an entirely different light. Having performed across Canada, Frank is a hidden gem of Canadian comedy. For more information about the tour check out this link www.facebook.com/THCCOMEDYTOUR
+ Google Calendar+ iCal Export

Check out our first TikTok featuring some of the delicious discoveries to enjoy in #goldcountryBC! Be sure to like and follow our channel for a chance to win a cool prize pack that will help you enjoy the tasty treats, meals and beverages in this diverse region! Mmmm, who’s hungry? ... See MoreSee Less

This error message is only visible to WordPress admins

Due to the recent rain, floods and mudslides some areas of the Interior are on evacuation alert, evacuation orders, or are preparing to leave if necessary. Once again, it is a challenging time to travel for recreation to the Gold Country Region/Interior. Many highways, and back roads are closed due restrictions from the 2021 wildfire season, and now due to flooding and landslides.

Please #KnowBeforeYouGo. Keep current with all travel advisories and be prepared. We are also now entering the winter season. Be prepared for winter driving conditions and check out the Gold Country winter ready check list!

Please see the following links before you make any essential travel plans. If you are already in Gold Country please follow all local advisories: